The Athletic Department at Southlands Christian High School would like to give a “Senior Shoutout” to recognize our fall senior athletes. These seniors have endured some very unusual and difficult times. We trust and know that God has amazing plans for their life. Please join us in honoring our seniors. We will be honoring a new set/team of seniors throughout the year. This week we want to give “Senior Shoutouts” to our volleyball players. Please join us in celebrating Emily Biltonen, Rylee DeSimone, Tori Marvel, and Taylor Tonsay.

#5- Emily Biltonen attends Southlands Christian High School. Emily has played volleyball for 7 years at Southlands Christian and 1 year with Pacific Juniors Volleyball Club. Emily was named Defensive Player of the Year in 2018 and 2019. She was also named All-League Honorable Mention as a Libero in 2019. Emily has achieved High Honors in academics. She plans to attend the Honors Program at Citrus College and then study abroad with a focus on the art of photography. Emily’s ultimate goal is to be a photographer for National Geographic. Her best piece of advice she wants to leave for her teammates is, “Always work hard because the end result is worth it.” Emily’s favorite bible verse is Jeremiah 29:11 which says, “For I know the plans I have for you, declares the Lord, plans to prosper you and not to harm you, plans to give you hope and a future.” Her favorite volleyball memory with Southlands Christian was winning the 2018 Desert Christian Volleyball Tournament.

#7- Alyssa Rylee DeSimone attends IPoly High School. “Rylee” has played volleyball for six years. In addition to playing for Southlands Christian, she has played for Icon Volleyball Club and Pacific Juniors Volleyball Club. Rylee plans to attend Pasadena City College and study Environmental Science. The best piece of advice that Rylee wants to share with future graduates is to “Work hard for the things that you want.” Her favorite bible verse is Acts 10:15 which says, “The voice spoke to him a second time, “Do not call anything impure that God has made clean.” Rylee’s favorite volleyball memory at Southlands Christian was attending the sports retreat and bonding with her teammates.

#25- Tori Marvel attends Southlands Christian High School. This is Tori’s first year playing for Southlands Christian. She previously played at Eastside Christian High School where she was named Offensive Player of the Year (2018) and received the Coaches Award for her dedication and hard work. She was First Team All-League her Sophomore year and Second Team All-League her Freshman year. Tori was an Honor Roll recipient during her first year at Southlands Christian and also received High Honors in 2020. Tori wants to be an Occupational Therapist to work with special needs kids. She was accepted to Grand Canyon University but plans to attend community college first, then transfer to a University to obtain her degree in Psychology. Tori’s best piece of advice that she wants to share with her teammates is, “Do your best in everything you do and you will succeed. Have fun and make memories as much as you can.” Her favorite quote is, “Next time Satan reminds you of your past, remind him of his future.” Tori’s favorite memory of volleyball was during her freshman year at a tournament. The games were some of the best games they played as a team. In between games they all sat together, ate some food, and started to sing worship songs together. They won that tournament and it is a memory that she will hold onto forever. 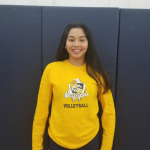 #10- Taylor Tonsay attends Poly High School. Taylor has played three years for Southlands Christian. She also played for three years in middle school and one year for Icon Volleyball Club. She was named Offensive Player of the Year during her Junior year. Taylor plans to attend college to study Biochemistry or Ophthalmology. Her best piece of advice for her teammates is, “It’s okay to mess up. Don’t give in to the pressure of having to be “perfect.” It’s all about showing the best version of yourself as much as you can even when others try to put you down.”  Taylor’s favorite bible verse is Psalm 27:13 which says, “Still I am certain to see the goodness of the Lord in the land of the living.” Taylor’s favorite Volleyball memory at Southlands Christian is when she had served over 10 points in a game during her junior season. It is one of her favorites because prior to that day she had a hard time serving and was in a slump. When she played that day, it all kind of went away and she really picked it up from there.