The Southlands Christian Eagles defense played a huge role in the 8-0 win over Don Bosco Tech Tigers on Friday night (9/6/19).  After last weeks hard-fought loss to Desert Christian Academy, the coaches remained focused. They knew that teaching the boys to fight through adversity would grow them as young men and football players. The growth was evident in Friday night’s win! 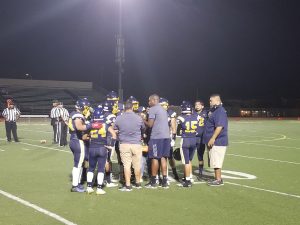 The Eagles faced adversity in the first quarter when starting quarterback, Josh Carrillo (#4), went down with a knee injury. The Eagles and Tigers went back and forth in a scoreless first quarter. With Carrillo out of the game, Senior Leo Christensen stepped in and threw a 55-yard bomb strike to Raphy Agudo (#20) to put the Eagles up 6-0 on the first play of the second quarter. Victor Lazum (#50) pounded the 2 point conversion in, giving the Eagles an 8-0 lead.

From that point on, it was all defense! The defense had three clutch fumble recoveries in the game. One of them came on the next Tiger’s offensive series. After an Eagles punt, the Tigers once again started marching down the field! That’s when Emiliano Avila (#15) intercepted the pass on the Tigers own 28-yard line. Avila had another key interception on the Tigers 6-yard line.

With 3:33 left in the game and the Eagles still holding the 8-0 lead, the Tigers looked confident as they moved the ball down the field. That is when freshman, Devon Groves (#5), picked off the pass at the Tigers own 28-yard line. It appeared that all the Eagles had to do now was secure the ball and run the clock out for the win. Unfortunately, the Eagles fumbled the ball and the Tigers recovered it at their own 30-yard line with 2:59 left to go in the game. The Tigers quickly connected on a huge 45-yard pass downfield, only to be saved by a great tackle from David Perez (#24). The clock was now ticking down to 1:41 and the Eagles had to dig deep to make a stop. However, the Tigers continued to march downfield. They continued to use their timeouts to stop the clock and found themselves on the Eagles 4-yard line with 6 seconds to play. Would the Eagles hold on? With all the adversity they faced last week and throughout this game, it was time for the defense to really challenge themselves. Fighting through injuries, physical and mental exhaustion, the young men of Southlands Christian found themselves swarming the quarterback of Don Bosco as he ran a designed sweep to the left to try and score.  The Eagles took him down, holding on to an emotional 8-0 victory as time expired!

The 2-1 Eagles have a bye week next week, then look to continue their growth as they travel to Garey HS on Sept. 20th.