The Southlands Christian Eagles Varsity Football team kicked off their 2019 season with a 20-14 double-overtime win versus the Desert High School Scorpions on Friday night. 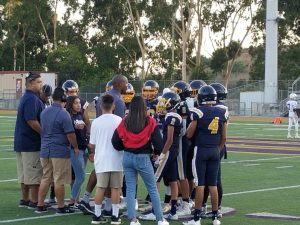 The evening began with an emotional tribute to freshman Devon Groves’ dad, Chris Groves, who tragically passed away this summer. The team paid tribute to Mr. Groves with a rose ceremony and a moment of silence before kickoff. The Eagles will also wear a “CG” decal on their helmets for the 2019 season. 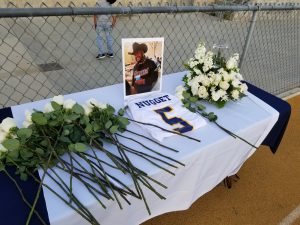 The Eagles fell behind 14-0 in the first quarter as they worked through some adversity. A very talented Desert Scorpions quarterback, Marquis Morris (#4), led the attack with a 4th down 33-yard touchdown pass. Morris later scored on a 2-yard scramble with 1:21 left in the first quarter.

The young men of Southlands Christian showed great character and grit as they didn’t let the early deficit define the outcome of the game! After some crafty coaching and player adjustments, the defense locked it down! The Eagles held the Scorpions to zero points the rest of the way. With 2:51 to go in the 2nd quarter, Joshua Carrillo (#4), intercepted a pass and ran it back to the Scorpion 40-yard line. With the defense fired up, a spark was lit with the Eagles offense! A few plays after Carrillo’s pick, Leo Christianson (#6) connected with wide receiver Carrillo (#4) on a 23-yard touchdown strike! After a missed 2- point conversion, the Eagles trailed 14-6 at half time. 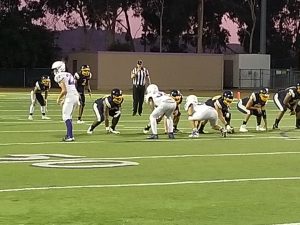 The Eagles defense stayed hot as they recovered a fumble late in the 3rd quarter. It didn’t take long for the offense to strike again! Senior Captain, Victor Lazum (#50), scored on the first play of the 4th quarter with a bulldozer run up the middle. Lazum then punched it in for the 2-point conversion to tie the game, 14-14!

After several exchanges with the ball in the 4th quarter, the Scorpions and Eagles headed to overtime. Both teams were held scoreless in the first overtime. The game ended when #4 Josh Carrillo threw a 30-yard bomb to #15 Emiliano Avila for the game-winning touchdown in double overtime! The Eagles look to get back at it this week as they face Desert Christian Academy at home (Nogales High School) on Friday at 7 pm Go Eagles! ”