Congratulations to our boys’ varsity basketball team as they defeated La Puente High School yesterday, 2/12, with a score of 77-67. Our boys were down 35-40 at the half as the Warriors were making any shot they wanted. However, the boys’ defense turned up as they limited the Warriors to 27 points in the 2nd half and scored 42 points as well. Aaron Reynolds and Vashon Vaughn led the charge offensively in the 2nd half. Duke Oliva and Bemhret Adnew made some clutch free throws as well late in the game.

The Eagles are making history at Southlands Christian as they have now made it to the playoffs for 4 years in a row! In 2017-18, the Eagles were a Final Four team as they made it to the CIF-SS Division 5AA Semi-Finals and finished with a 19-7 record, which is a school record for their best season. However, this year, 2018-19, the Boys’ Basketball Team is now 21-5 and have already surpassed their record. Here’s a quick look at the Quarter-Finals’ matchups. 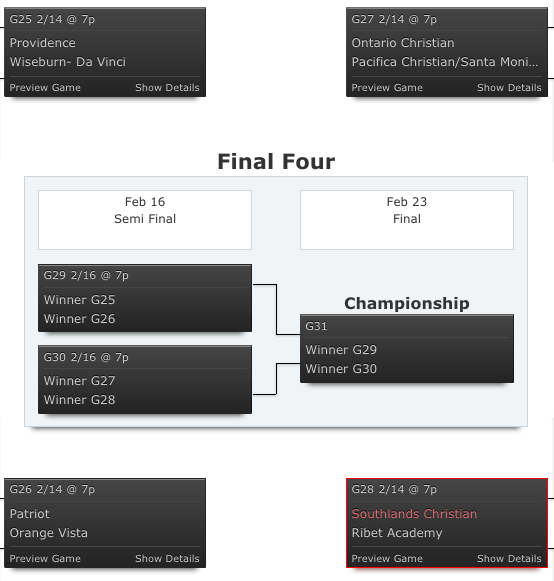 The Boys’ Basketball Team has now advanced to the Quarter-Finals and are an Elite 8 team for two years in a row!